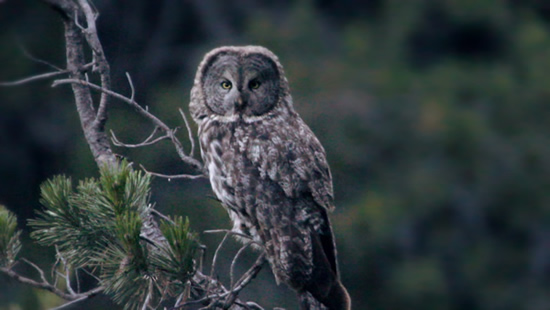 The largest owl in North America, the Great gray owl (GGO) is a boreal species and an extremely rare resident of Western montane meadows.  It is estimated that less than 50 pairs survive across the entire Sierra Nevada (Sears 2006).

In 2010, scientists revealed that the Sierra Nevada's great gray owl (Strix nebulosa Yosemitensis) is genetically distinct from the great gray owl in western North America (Strix nebulosa nebulosa). Behavioral differences also appear in the Yosemite subspecies. These include differences in migration patterns, prey preference, and nest site selection. Taken together, these are all indications that the Sierra Nevada population of great gray owls has been isolated from other populations for an extensive period of time.

Meadow breeding habitat is key to this species' survival. Owl researchers found a strong correlation between meadow vegetation height, the absence of heavy grazing, and great gray owl reproductive success. Researchers hypothesize this trend is linked to the presence of voles, the owl’s primary prey species, in meadows with tall vegetation. The 2001 SNFPA protected important owl breeding sites by requiring 12” of vegetation in meadows occupied by breeding Great Gray Owls (ROD, Appx. A-38).  Even the 1985 Great Gray Owl Interim Guidelines state that 10” vegetation height is preferable (pg. 8).  Nevertheless, the 2004 SNFPA tossed out the 12” GGO vegetation height requirement and replaced it with language that allowed forests to make up their own guidelines.

Loss of mature forest habitat for nesting is an additional source of habitat loss and availability of nest sites. If there are sufficient nest sites, then other factors such as food supply determine how many owls live in the area. Wildfires can act as ‘meadow surrogates’ by creating both nest sites (broken top snags), and a boom in rodent numbers.  Salvage logging operations typically reduce live and dead large-diameter trees used for nesting, leaning trees used by juveniles for roosting before they can fly, and dense canopy closures in stands used by juveniles for cover and protection. If perches are not left in these treated areas, GGOs cannot readily hunt in them. The species is far more common in areas protected from logging and also in areas which have seen a dramatic reduction in livestock grazing.

In the Sierra Nevada the GGO is a summer resident from 4000 -8000 feet in elevation and winter resident from 3000 - 5000 feet. They breed in mixed-conifer forests from 3000 - 6000 ft. and red fir from 6000 - 8000 ft. in elevation. They typically inhabit mature conifer forests adjacent to open wet meadows. They hunt voles, which require meadow vegetation heights upwards of 10” (Greene 1995; Sears 2006), therefore grazing must be carefully managed in conjunction with this species.  GGOs require areas with large trees and a dense covering canopy. Snags and dead leaning trees are an important component of their habitat as they provide potential nest sites and fertile teaching grounds for fledgling owls. The GGO utilizes areas with intact meadow ecosystems which support a viable supply of prey species.

The 2001 Sierra Nevada Framework Plan prescribed protective management strategies for the remaining populations of Great Gray Owls in the Sierra Nevada. Protected Activity Centers identified throughout the range were set aside to ensure that no detrimental activities such as logging or grazing would impact their habitat.

As of today the species is primarily restricted to the Yosemite area (and the Stanislaus NF), where it nests in late-seral forests adjacent to montane meadows or other forest openings. In 2014, the genetically distinct Sierra Nevada subspecies of Great Gray Owl was published and is now named Strix nebulosa Yosemitensis. It is estimated that this population has been distinct and separate from the nearest northern population for 24,000 years.

Recommendations for conservation of this rare species are detailed in Appendix A of Sierra Forest Legacy's 2012 Conservation Strategy for the forests of the Sierra Nevada. Download it here, then click on the Great Gray Owl link on the table on page 1. More recently (2016), the Institute for Bird Populations released a conservation strategy for the Greay Gray Owl.

You can also read more about the Great Gray Owl in the September, 2013 edition of The Sierra Voice, SFL's newsletter.

The State of California designated the GGO as an Endangered Species in 1980, the Bureau of Land Management considers the GGO to be a Sensitive Species, the Forest Service considers the GGO a Sensitive Species, and the California State Board of Forestry also lists the GGO as a Sensitive species. Stanislaus, Tahoe and the Inyo National Forests consider the species a Management Indicator Species (MIS) but only the Stanislaus National Forest and Yosemite National Park have confirmed breeding pairs.

California Department of Fish and Game Natural History Information --This California state website contains rather limited and old information but is a good basic background composite for the species. Choose from a drop-down list to select the animal you are interested in.